Disney+ has my complete and total attention. And when I was watching Disney+ on the treadmill yesterday, one show stood out. Here is a list of the all of the most bad-A quotes from The Mandalorian on Disney+. I picked my favorite Mandalorian quotes by episode because this show just gets better and better! ps- you can also check out the Onward Movie Quotes from Barley too. Ready for the Mandalorian season 2 quotes? Got those as well!

Pedro Pascal is The Mandalorian in the Disney+ series THE MANDALORIAN. Copyright : (c) 2109 Lucasfilm Ltd. All Rights Reserved.

If you’re looking for where the Mandalorian fits into the Star Wars movie timeline, it’s between Return of the Jedi and The Force Awakens.

And if a Star Wars movie marathon is on your mind, be sure to add this series into the best way to watch the Star Wars movies list in the right place!

But I want to talk Mandalorian quotes today, because this dude? He’s a bad-A. And in the words of David Rose, that should be celebrated.

I pulled together the best 99 quotes from The Mandalorian season 1.

Don’t you agree is one cool guy? Even if a bit, ahem, violent… but bounty hunting is bound to be messy, amirite?

ps- check the Ultimate Parent Guide to Disney+ for updates on the kid-friendliness of most of these shows.

What’s The Mandalorian About?

After the stories of Jango and Boba Fett, another warrior emerges in the Star Wars universe.  “The Mandalorian” is set after the fall of the Empire and before the emergence of the First Order. We follow the travails of a lone gunfighter in the outer reaches of the galaxy far from the authority of the New Republic.

He’s a man of little dialogue so far. But when he does speak, The Mandalorian delivers.

And if I know the internet, I’m sure they will give these the Disney Plus meme treatment soon enough!

If you’ve seen the show, you know just how powerful these lines are delivered. This list of The Mandalorian quotes are giving me LIFE!

I can’t wait to add more as the series progresses.

Chapter 1 Quotes From The Mandalorian

4. I don’t know if you heard but the Empire is gone.

9. Perhaps he remembers I tried to roast him.

12. Do not self destruct. We’re shooting our way out.

And of course: you know this quote HAD to be included, even if it’s not directly stated by The Mandalorian. Because it’s probably the best quote of the whole Star Wars series.

I’ve been using that one a lot around the house with the kids- ha!

And if The Mandalorian isn’t your thing, don’t forget all the Disney Christmas movies on Disney+!

More Mandalorian Quotes From Episodes 2 and 3

The Mandalorian has a ton of great quotable moments, so I’m just going to keep adding them on! I’ve decided to make a Mandalorian quote list for each episode.

I’ll update this every week as we go along, hopefully, every Friday as the newest Mandalorian episode drops for new quotes.

17. They all hate you because you’re a legend

18. I’m going to have to relocate the covert. This is the way.

Most BADASS Mandalorian Quotes From Chapter 4

Guys, these Baby Yoda memes are totally going to be the end of me. He’s so dang cute- and each episode we get cuter and cuter Mandalorian and The Child interactions.

Episode 4 of The Mandalorian Quotes are perfect examples!

26. You think I’m some kind of mercenary? (response from the farmer) You are a Mandalorian, right?

The Best Quotes From The Mandalorian Chapter 5

My girl, Ming-Na Wen, shows up in this one. Combine that with the most adorable Baby Yoda moments yet (hello to that giggle!) and this might be my fave episode so far.

36. I’m going to look after you until the Mandalorian gets back. And then I’m gonna charge him extra for watching you. – Peli

38. Fennec Shand is an elite mercenary. She made her name killing for all the top crime syndicates- including the Hutts. If you go after her, you won’t make it past sunrise.- Mando

40. Tuskens think they’re the locals. Everyone else is just trespassing. – Mando

47. A Mandalorian. It’s been a long time since I’ve seen your kind. -Fennec

51. Then think what it would do for your reputation. Your name would be legendary. -Fennec

52. You want to be a bounty hunter? Make the best deal for yourself and survive. -Fennec 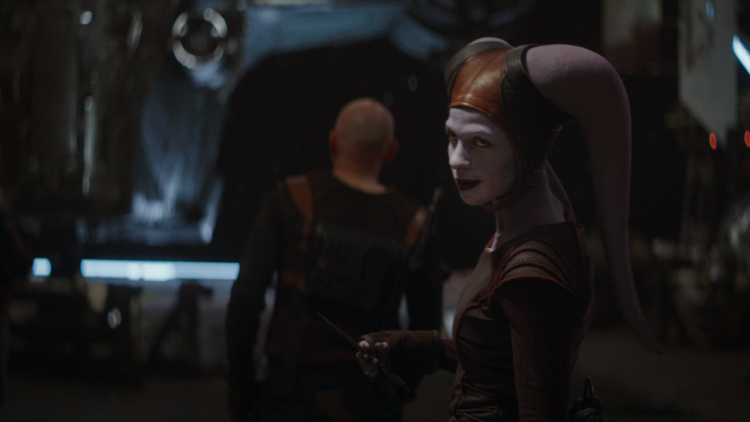 The Prisoner Chapter 6: Quotes From The Mandalorian

58. What did he get out of it? – Mayfield
I asked him that one time- remember what you said, Mando? Target practice. – Ran

60. He’s one of the best triggermen I’ve ever seen. Former Imperial sharpshooter.- Ran
That’s not saying much. – Mando
I wasn’t a stormtrooper, wiseass!- Mayfield

61. So this is a Mandalorian. I thought they’d be bigger. – Burg

63. The ship is manned by droids. Still hate the machines, Mando?- Xi’an

66. What about your sister?- Mayfield
What about her?- Qin
Nice family. – Mayfield

67. Where are the others? -Ran
No questions asked, that is the policy, right? – Mando

Chapter 7 Quotes From The Mandalorian

69. Return to Navarro. Bring the child as bait- Greef Karga

70. I’m already free of worry- and I’m not in the mood to play soldier anymore. -Cara Dune

71. Do you trust the contact? -Cara Dune
Not particularly. -Mando

72. Please lower your blasters, he will not harm you. It will protect. -Kuiil

73.Droids are not good or bad, they are neutral reflections of those who imprint them. -Kuiil

74. None will be free until the old ways are gone forever. – Kuiil

75. So this little bogwing is what all the fuss was all about? -Greef Karga

76. I guess the little bugger’s a carnivore. – Greef Karga

78. As long as the Imp lives, he’ll send hunters after the child. -Mando

79. I’ll give you 20 credits for the helmet.- Stormtrooper

83. He just killed an officer for interrupting him, so this might take a while. – Trooper on coms

97. Some of my favorite people are bounty hunter. – Greef

SHOP THE BABY YODA MUG DO THE MAGIC HAND THING

It’s never been a better time to runDisney and head to Walt Disney World than now! Especially as a Star Wars fan.

With Galaxy’s Edge opening and some fun runDisney Character stops on the Rival Run course, trust me, it’s time to make this travel happen. And I mean, the Star Wars medals are pretty sweet every year!

Want to know more? I’m a travel agent that runs Disney and I’d love to get you quoted for the 5th anniversary Rival Run.

Fill out this form and I’ll be in touch with details.

May the Course Be With You!

Christmas Songs and Puns from Noelle

Spies in Disguise Movie Quotes Your Kids Will Be Repeating