Where Can You Run At Disney World?

Home » runDisney » Where Can You Run At Disney World?

With all the runDisney races going virtual this year, I think this is the number one question on traveler’s minds. Where can you run at Disney World? A lot of folks are still traveling to the race weekend- and plan to get their miles in for the runDisney virtual medals. So where’s the best place to run at Disney? Here are a few options.

Running at Disney World isn’t going to look like this for a while, but that doesn’t mean you can’t still get some miles in!

Do you run on vacation? If you do, you are probably familiar with some of these running path options at Disney World resorts.

But if that’s not your thing- but you want to earn your virtual Wine and Dine Half Marathon, Marathon, or Princess Half weekend medals onsite, then this is the post to help you do just that!

If you are familiar with the resort fun runs, you know a few pre-set running paths at resorts.

You can check out that list of Disney resort fun runs here, but be warned:

These are not happening at the current time.

Hopefully, they come back to the resorts sooner than later! But for now, you can use some of their paths for your personal virtual run. 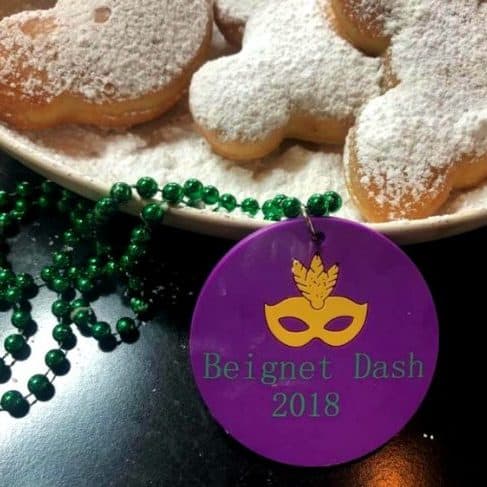 Where Can You Get Your Virtual Race Miles Run At Disney World?

While there are many options to running at Disney, I’ve narrowed down to a few that might get the biggest bang for your mileage buck.

Please don’t forget to throw in a DIY runDisney costume for these races, because did you really runDisney if it wasn’t in costume?

I’m putting this one first because I know runners- and runners LOVE them some Pop Century.

Great theming, great rooms, and a great price- plus a decent amount of room to run if you plan to get some miles in!

You can get about 3 miles (or more) by running through both the Pop Century and Art of Animation resorts and utilizing Hourglass Lake as well.

You will have to weave a bit, so I’d plan those runs early- well before rope drop- to avoid the most people.

In the 50s area, you’ll find Lady and the Tramp cheering you on!

I will give my favorite sunrise at Disney World award to this area: the Boardwalk path around Crescent Lake.

I made it a goal to run just fast enough to get to the Boardwalk during the 10Ks to be rewarded with this gorgeous sight:

So if you run Boardwalk, Beach Club, and Yacht Club- throw in a trip to Swan and Dolphin and Hollywood Studios as well- you can get a decent run in.

This should bring in about 2.55 miles if you do the full distance around Crescent Lake.

That’s not quite the full distance you need to run your virtual 5K at Disney World, but it will be pretty close.

Add some extra mileage to get to the Beach Club for some cheesy potatoes to refuel afterward.

You won’t be sorry!

Not too shabby if you need a little distraction!

This is one loop I haven’t personally run, but I have walked it.

And the whole time I thought, man, this would be perfect for running early in the morning with no one around!

Disney thought so, too, and even made this area one of its official Running Trails.

By the way, these used to be called New Balance running trails, but I think that went away when the runDisney New Balance shoes did!

You can get a little over 2 miles by running along the Seven Seas Lagoon.

To get that full mileage in, make sure you end to end from each of the resorts.

This distance could grow when the walking path from Grand Floridian to Magic Kingdom is completed.

You probably won’t be able to run straight into the arms of Mickey, but it will be pretty dang close!

Hopefully, this gives you some ideas on where you can run your 2020-2021 runDisney virtual races at Disney World.

The resorts offer some mileage; you just have to know where to look for them!

Disney Masks For the Family

Wear... A... Mask! Be Our Guest Parody
← Previous
The Mandalorian Season 2 Posters Are Here- And They Are HOT!
Next →
Click here to cancel reply.