What’s the Weather Like For Wine and Dine Half Marathon? It’s… Complicated

What’s the Weather Like For Wine and Dine Half Marathon?

I am one of those weather stalkers when it comes to a runDisney weekend. I’ll admit it.

I worry probably way too much over the what-ifs when it comes to the weather. Because running when it’s too hot or too cold or too wet is just not fun- and I’m all about having fun at these races.

This question comes up often and it’s one that doesn’t have a clear answer. Florida isn’t an easy gal to understand when it comes to the weather, but hopefully, this can help give an idea as to what you can expect from the weather during Wine and Dine Half Marathon weekend.

More than 13,000 runners gathered to run the Disney Wine and Dine Half Marathon race at Walt Disney World Resort in Lake Buena Vista, Fla. on Saturday, Nov. 8, 2014. The Disney Wine & Dine Half Marathon, the secondÊrunDisney night race this year, capped a sold-out weekend of events that featured more than 18,000 runners, including more than 13,000 that ran the 13.1-mile race through multiple Disney theme parks. The runners celebrated their accomplishment with an exclusive after-hours Finish Line Party at the Epcot International Food & Wine Festival, featuring more than 25 kiosks offering fine cuisine and wine, plus Disney characters, musical performances and the opportunity to ride signature Epcot attractions. (Todd Anderson, photographer)

When Is the Next runDisney Wine and Dine Half Marathon Weekend?

The Wine and Dine historically runs the first full weekend of November.

This year, the first day of Expo will be held on October 31 with the 5K running on November 1, the 10K on November 2, and the Half on November 3.

While dates have not been announced for 2020, it will likely be held November 5-8.

If you’re new to runDisney, check out this runDisney: Ultimate Guide to Magical Miles post.

2013 runDisney Wine and Dine Half Marathon

What’s the Temperature Like During Wine and Dine Half Marathon Weekend?

By early November, most places around the country are cooling off.

Florida? Not so much. At least, not always and not consistently. It’s seriously a hard time of year to nail down!

Historical Temperatures During runDisney’s Wine and Dine Half Marathon Weekend

The average temperatures for this weekend tend to be high in the low to mid-80s with lows in the mid-60s.

While that doesn’t sound bad for running, you have to factor in dew point and humidity; because that can be the deal-breaker when it comes to running your best race.

In early November, it’s not unheard of to see 100% humidity on race mornings. And that, my friends, is like running through a swimming pool.

That sweatshirt would be a bit much for the weather at most Wine and Dine weekends. In 2018 it wasn’t too bad for a 5K, though!

Does It Rain During Wine and Dine Weekend?

Welp, it’s Florida. So… sure. It will probably rain.

The likelihood of rain in Orlando eases a little as November rolls in, but there can be periods of rain in the area even in November.

If you are not familiar with a Florida vacation, the simple answer is you should be prepared for just about anything.

It might rain for 5 minutes one day, or it might rain for hours every day. Trying to predict what a Florida storm will do isn’t easy, even for the trained meteorologists!

The Splash and Dash runDisney Wine and Dine of 2014

This was back when the half marathon was a night race and the 10K didn’t exist.

And the weather was much more unpredictable!

By the time the race started at 10 PM, it was full-on raining. And it didn’t stop for quite a while. While PRs were not broken and many characters were not on the course due to weather, a name was born.

The Splash and Dash of ’14 happened and those that ran it have stories to tell!

2015 wasn’t much kinder to runners from a weather perspective.

While it ultimately stayed pretty dry, there was a huge storm rolling through the weather consisting of lightning and heavy winds. It came right as runners were staging for the race and it caused a huge delay.

Everyone was evacuated to the shelter of the Wide World of Sports buildings and had to wait things out. 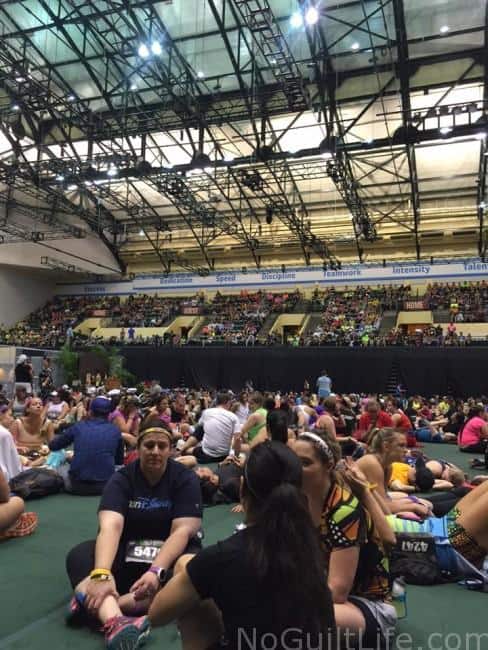 The race eventually ran but was cut almost in half to adjust for the change in start time. This is known as the runDisney Half of a Half.

The Wine and Dine eventually changed to a daytime race and that decision just might have been partially made with the weather in mind.

Okay, and that they wanted to add a challenge and 10K to the weekend, but knock on wood, the evening issues haven’t followed with the morning race starts.

When Can You Start Looking at the Wine and Dine Weather?

Probably the week of. I mean, I know that isn’t helpful for working on your runDisney racing costume, but it can change quickly.

So plan for just about anything, but really take a look starting the week of travel.

And don’t forget to check the Wine and Dine Waivers, Event Guide and Corrals before you go. It might help you know where you are going to start the race and how much time you’ll be waiting before the race.

The 2019 runDisney Wine and Dine Medals

runDisney Princess Half Marathon: Everything You Need to Know