The Twilight Zone Tower of Terror 10-Miler happened last weekend and reports are filtering down about the race.  I wanted to give a little bit of information on what I’m hearing since I’m sure many of you are interested in running this race next year.  If you remember back to Sunday, I gushed a bit about how awesome the Twitter reports made this race looked and how excited I was to try to run this in 2014.  The reports from runners are sealing the deal for me! 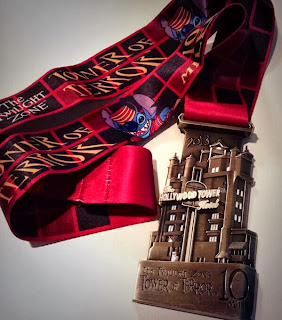 1.  Temperature
It was hot, but it wasn’t AS hot as last year.  Thank goodness for small favors, I guess!  Most folks said it cooled off a bit as the sun set and made the race much more enjoyable than last year.  Considering last year sounded like they literally ran through hell, I’ll take this as a win.

2. Corrals
This was the first race featuring the new corral approach.  There were more of them, and they were smaller.  The idea is to give more space along the course by releasing runners in a small but steady stream rather than spacing corrals 5-7 minutes apart and sending huge chunks of runners down the road.  Most reports I read today said this was a FANTASTIC improvement.  The most supportive folks were the ones in A-D corrals. 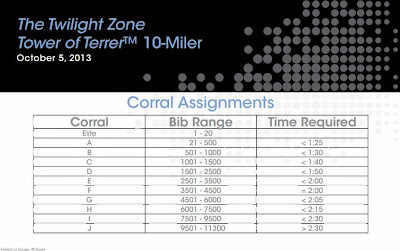 They had less folks in each corral which allowed runDisney to send them off in 2 minute waves vs the 4-5 minutes for the larger back of the pack corrals.  Those runners in the back still report crowding, but as one  pointed out it was “nothing like the Princess Half this year- so yes, it’s an improvement.”

3.  Course
Water, water everywhere!  And all of it to drink.  There were 7 water/hydration stations along the 10 mile course.  I don’t think you could ask for more.  runDisney was prepared for the heat and humidity of the  race this year and stocked the aid stations accordingly.  Medical personnel at the finish lines said there was much fewer casualties due to dehydration this year than last year.  Sounds like everyone took the temperatures seriously.

runDisney also gets an A+ for casting the scariest, spookiest characters yet!  Gah!  I’d hate to run into this guy! 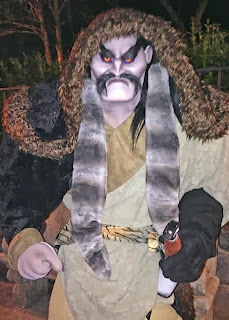 4.  Sweepers
Another runDisney race in Walt Disney World has passed us by and another round of folks didn’t make it to the finish line on their own.  By most reports at least 200 folks had an encounter of the sweeper kind, and ended up getting a bus ride to the finish.

We call it the SAG Wagon.  Saddest ride in all of Disney, am I right? By most accounts, this race saw the fewest numbers of people being asked to ride the bus.  Some call it the bus of shame, I call it the unwanted fast pass.

Reports are being shared that the usual care & politeness occurred with the folks who were taken off the course.  Water, cool towels, medals and an air-conditioned ride back to the finish line were offered.  No one has told me that they experienced an unkind word by any staff or voluntEARS during this process.  I am happy to hear this.

5.  Balloon Ladies
Do you remember this post where I introduced you to Molly?

The number one question I was asked about the pacers was:  do they have to buy their own balloons?  The answer: YES they sure did.  You know runDisney always listens to their runners when it comes to ways to improve the experience.  This was one of those cases where they came through in style. 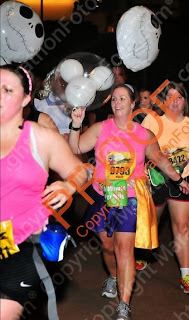 Check those out! Squeeee!!!  Readers, you spoke and runDisney listened! They provided Molly and Nancy with these amazing and perfectly themed balloons for the race.  Give yourselves a pat on the back for making change happen!  Go Team No-Guilt Life!!  We are Change Champions, my friends!  WOOT!

Yeah… I am being slightly silly about it, but I’m tickled that they got these awesome balloons. Disney knows details- and this time, they got it right!  Can’t wait to see what type of balloons the ladies will be sporting at the Wine and Dine Half in 30 days.  Perhaps a wine bottled shaped balloon, or even better, one of these?

Nancy and Molly both took my suggestion to try out Sparkle Skirts.  Molly was sponsored by the Queen of Sparkle, Leah Powell, with this amazing hand painted one of a kind soft plum Sparkle Tech skirt.  No, you cannot have one.  Sorry! (That’s what one of a kind means!) Nancy wasn’t sure she was ready to commit to a skirt so she tried out a friend’s Sparkle Light for the race.  I think they look SMASHING, don’t you? 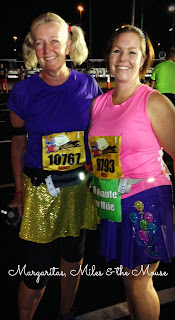 Based on the 2012 reports of this race, I wasn’t touching it with a 20-foot pole.  I’m not exaggerating.  This was one race there was NO WAY runDisney was ever going to get money from me.  No Sirrreeee.
Yeah… you know how this goes, right?  I’m all about talking Mr. Shenanigans into running the Tower of Terror 10-Miler next fall.  I mean, they had Maleficent. And fire bursts going off in a pond.  And the ballroom dancers from the Haunted Mansion. And the old hag from Snow White offering apples.
I neeeeeeedddd to see this!
It’s not Disney magic that parts me from my money, but Disney brilliance.  Well played my friends at runDisney.  Well Played.
Tell me what you thought about this race?  Did you run this year? Are you checking in again in 2014?

How was the afterparty? in 2012 when i crossed the finish line, there was already a 70 minute wait on the tower of terror ride mostly due to the nonrunners attending the afterparty. Over crowded and just took the fun out of the afterparty for us.

The temps weren't too bad but the humidity was still awful. You just have to be smart and take the course a little slower. It was a lot of fun but still a pretty warm night.

If I can convince the husband, I am totally in for 2014. I love Disney. I love Halloween. It seems like a no-brainer. I'm glad to hear about all of the improvements. Hopefully 2014 will be the BEST! :)

My husband ran it last year and although he did fine, the weather took a toll on his pace. As much as I didn't think I would like it (so I wouldn't feel "obligated" to do it again), I really did like it! He was in A, but came back to the front of D with me- we were the first to cross the start mat. Never felt crowded, stopped for pictures and ran beside him as he paced me...it was great! Pretty sure we'll be in for next year too!!

I love it! My husband ran DDD with me and it was great.