Why do I runDisney?  Many, many reasons.  But probably the number one reason is because I’m a little kid at heart!  These races are some of the few where costumes are the rule rather than the exception.  And I love a good costume.

My philosophy is simple:  since I’m probably not going to win, I might as well look cute and have fun.  Simple, right?  Over the years my costumes have evolved and I’ve learned some simple rules to racing in costume.

Here are my thoughts as you plan out your Princess Half Marathon wardrobe. 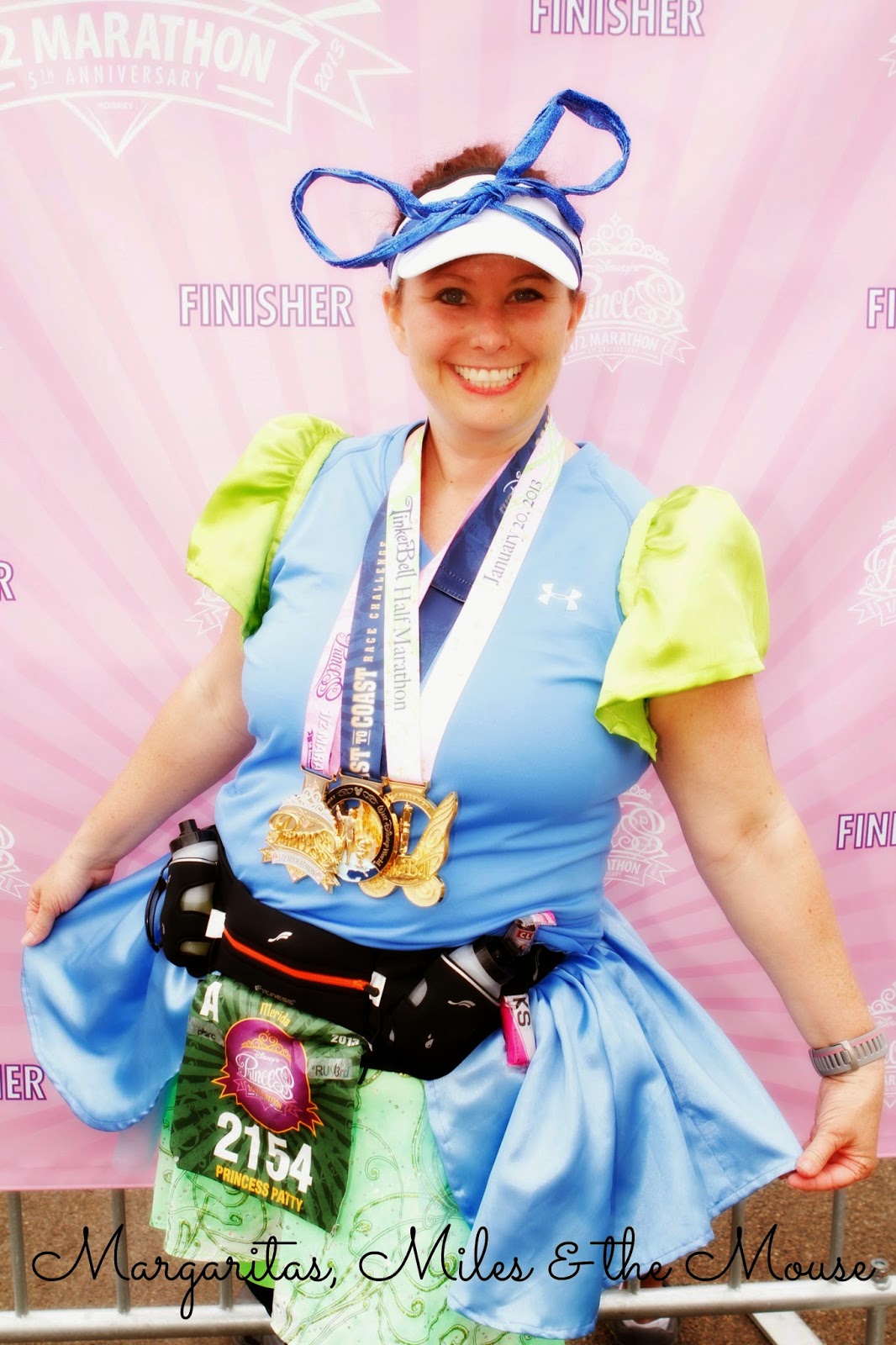 1.  Make sure you LOVE it.  Cause if you don’t, you won’t be happy for 13.1 miles.  And at least for me, that means being unhappy for a reallllllyyy long time.  Ahem.  You don’t want to hate your race picture either, especially at Princess Half Marathon where there are LOADS of opportunities to stop and take a picture.

2.  Make sure it is comfortable.  I’ve seen some really great costumes pieced together from traditional Halloween costumes.  They look FABULOUS but as DisBroad Amy learned at the Wine and Dine, they aren’t all that awesome to run in.  My suggestion is to make whatever you usually run in the base for a costume.  Layer, sew, iron-on, glue, etc whatever you wish to add to become someone else, but start with “normal” running gear.  Especially in Florida.

I also had to make a huge costume change at Wine and Dine.  But I knew this going in- it was about pre-race pictures when I planned this one out more than what I thought I’d run in.  Progression of the costume to follow.

3.  Make sure you stand out!  I try to go against the “theme” of the race.  If it’s the Princess, I run as a villain.  If it’s Tinker Bell, I run as anything that DOESN’T require wings.  Face it, after a few miles aren’t you tired of allllll the tu-tus and wings?

4.  If possible, give yourself options.  On the course options.  You can peel off layers and toss them if you wish and the Disney folks will pick up the items and donate to charity.  You will NOT see them again.  Or you can do what I do.

True story: I had a costume change last year at PHM.  I wore Drizella until we left the Magic Kingdom.  I determined it was too dang hot for all that satin and whipped out my secret weapon:  a backpack and extra shirt stashed in the handy pockets of my skirt. Once we safely entered Epcot, I changed back because I knew I wanted to cross the finish line with my sister, DisBroad Anastasia Julie.

5.  Dress with friends!  I cannot tell you how much fun this is!  Check out the picture the DisBroads got as our countries of Epcot theme for the Wine and Dine half.  We had a blast planning and executing these costumes- and the pictures show how happy we clearly are together! 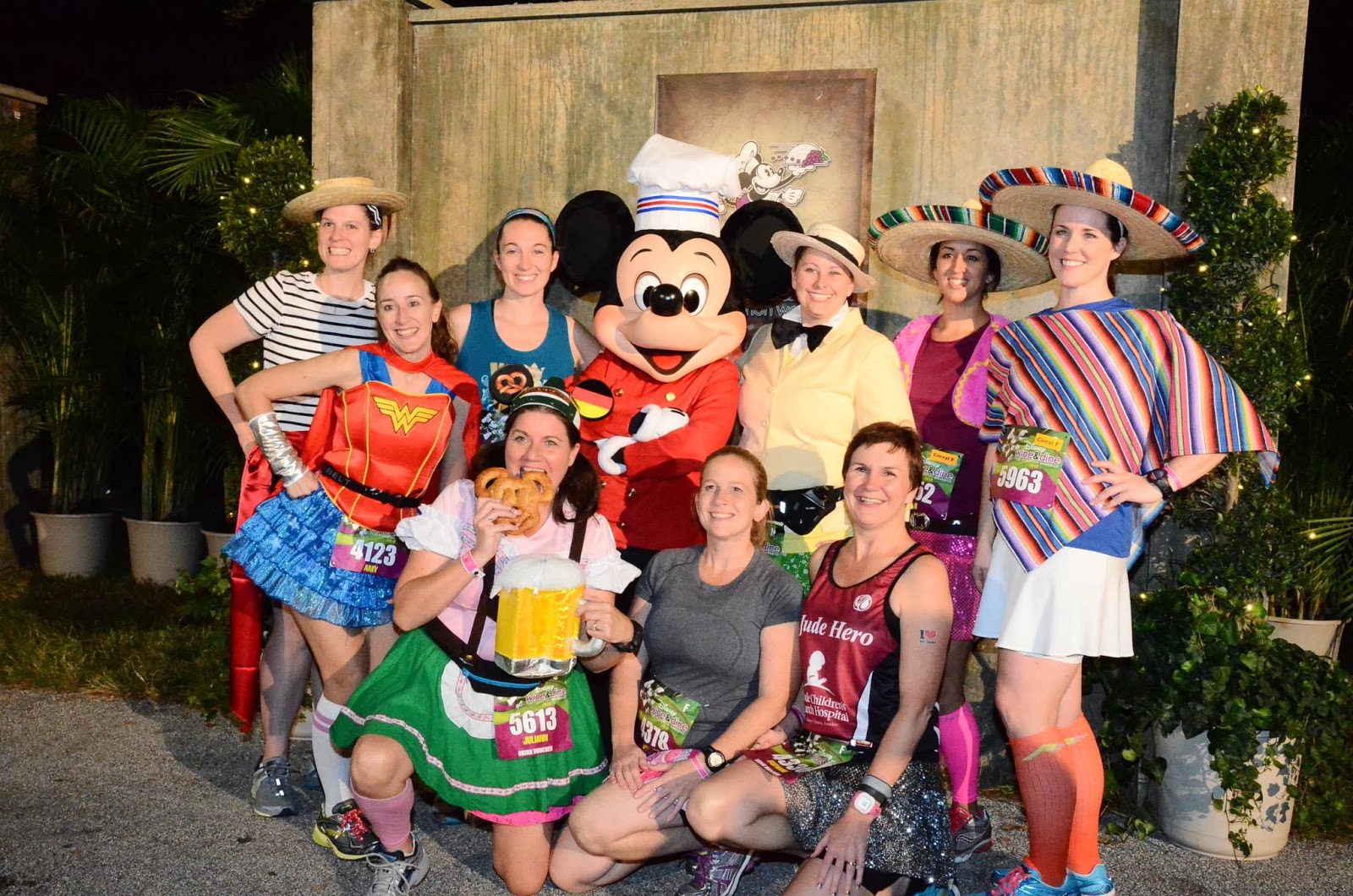 I asked a few blogger friends to share their costume tips as well.  Be sure to check these links if you are looking for ideas and suggestions.  I LOVED the post by Erin.  She reminds us that the backs of our costumes are possibly even more important than the fronts!  More people will see you going as you pass them by then they will see you coming, right?  Be sure to check her post out for the details.

Erin- runDisney Costumes From Behind

Jodi- Saying Yes to the Dress

Jenny gets a special shout out.  She stole my idea.  No, just kidding, she just beat me to the punch!  I tossed this one out to the DisBroads and they were less than enthused.  Since we all want to dress in theme together, it’s been shelved.  I’m thinking my next Disneyland race might include a version of what Jenny pulled off.  She completely rocked this one!

Do you love to run in costume?  What’s your plan for the Princess Half Marathon?

noguiltdisney.com
Spread the love
« Blogger Down
Future of runDisney Meet-Ups? »

If she isn’t running after her four kids in Northern Virginia, Patty is running after four bars on her phone to share her authentic and fun stories about runDisney. There’s nothing quite like running through a Disney theme park with 20,000 of your closest friends!