When I finished in 2011, I was pregnant and slow- real slow.  I finished in just over 4 hours of walking, earned about 10 blisters (one for each toe) and could barely move when it came time to hit Epcot for the celebration steak at Le Celliar.  I pretty much hated the experience.  It was cute, and exciting at first, but 4 hours of anything that leaves you in pain just ain’t fun, yo!

But like child birth, with time, the pain fades and the excitement builds and I was game to run another half.  My friends were on board again, Mr. Shenanigans said “go!” when I asked him about it, and so I waited for registration to open.  Once I signed up, I felt like this was the year I could make some progress and become a real runner.

Of course, that only sorta happened.  I did train and work on the plan, and decided to follow Galloway again (walk/run/walk/run).  My intention was to start with 1:1 intervals and work up to 4:1 intervals.  Yeaaaahhhhhh… didn’t happen.  I got stuck at 1:1 and just stayed there.  It was comfortable, and I could get those long miles done without too much pain, so I stuck it out at 1:1.

The planning was more fun for this trip.  There were *new* rooms being created and they were calling my name:  Royal Guest Rooms (aka, the Princess themed rooms) at the Port Orleans Riverside resort.  After doing some math and checking the schedule for Princess 2013, I realized that getting an Annual Pass would actually pay for itself with hotel room discounts.  Nicer hotel room for less?  Yes, please!  With the AP rate on board, I booked my sister and I at the POR RGR and was very excited.

Dining reservations were next- I tried and tried and tried for Ohana’s- my all time favorite!- and was denied.  And denied and denied.  About the time I really worked on getting dining booked, Disney released the “One More Day” promotion for leap year and things booked up fast.  Ohana was not meant to be- and I was sorely disappointed.  Bread Pudding, y’all, just rocks.

Clothing?  This is always a big issue with the planning of a Disney race.  You get to dress up- if you want.  And I would love to, but am still concerned about just finishing at this point, so I haven’t gotten brave enough to try out running in costumes.  I settled on a runningfunky.com skirt in Minnie Mouse polka dot print.  It was cute and comfy and I felt I was in the Disney spirit.

Socks were another issue.  Mile after mile my feet would ache.  I needed padding, or compression, or something more.  And I was terrified of getting those blisters again!  I finally landed on a pair of Feetures! socks with Zensah compression calf sleeves for my legs.  Paired with my compression shorts and Minnie skirt, and I felt I was in good shape to be able to walk after finishing this race.  With gear- you just have to do trial after trial to see what works for you.﻿﻿

Back to training…. there is a lovely race in Austin called the 3M Half Marathon.  It’s billed as a down hill course that yields a ton of PRs.  Checking my training schedule, it fell on the same week as my 12.5 mile run at the end of January.  I decided to run it as my “training” run.  What can I say- I like bling!

I am such a mental runner that 4 miles into this race I was cussing out the people claiming this was a down hill race.  There were hills, really, there were.  It’s a rolling hill course- that gradually goes downhill.  I personally wouldn’t say that it’s down hill, but by elevation, yes, it goes down. There wasn’t a lot of entertainment, but this is Austin, so the neighbors come out and wish you well.  And give you beer (ick!) or mimosas (yum) or a drum solo (thank you random kid- I am sure your neighbors loved it!) as well as petroleum jelly on tongue depressors in case you are chafing.  I love Austin.

This race was pretty great because it was the first time I really noticed the TEAM in Training groups- they were everywhere!  And encouraging everybody!  Even lonely ol’ me bringing up the end of the race.  I wasn’t wearing a stitch of purple, but they cheered me on, and it was really nice.

The last 3 miles I was forced to walk due to an incredible calf cramp that wouldn’t go away.  If I began a jog, it seized up immediately.  So walking it was… and I was not happy to be walking.  But I finished, and it was a much improved time over the last half I did (Princess 2011) so I was very happy.  3:20 finish time.  I am sure I could have been closer to 3:10 if I had run the last miles rather than walk, but hey, it happens. 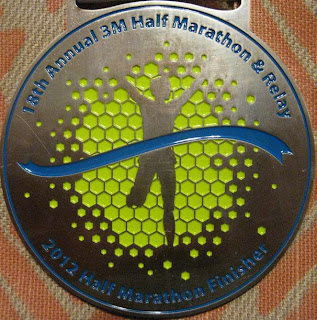 After this race, I was ready for the Princess 2012.  But first… some unexpected Pixie Dust came my way….
﻿﻿
Part II