Okaaaay so I know it’s not technically “runUniversal” but go with me here.

Today, Universal Studios Orlando announced that they will be hosting an Epic Running Universal Orlando Character Race Weekend this February… and I could not be more excited.

It got me thinking, though, about how different it is actually going to be!  So here’s my quick list of differences between runDisney Races and Universal Running races.

Universal has had one successful race weekend, the Minion 5K in Hollywood last May.

They have one coming up this November – Jurassic World Run – and that’s it so far.  The jury is still out on if these themes will be recurring or changing year-to-year.

The “theme” for Orlando’s races is simply “Epic Character”. I am not sure if that is a placeholder title with the actual theme to be announced at a later date, or if it’s really just a race celebrating all of the Epic Characters under the Universal umbrella.

With The Epic Universe Themepark coming to Universal Orlando, maybe it is just all things Epic?

Or hey, they have the rights to Marvel on the East coast. So- Avengers assemble, anyone? Cause that would be EPIC.

The Race Distances at runDisney vs Running Universal

So runDisney race weekends typically have a 5K, 10K, and Half Marathon with some kids races as well.

January’s Marathon week has a full marathon on top of the others and all have a combination of challenges you can complete by participating in more than one race distance. 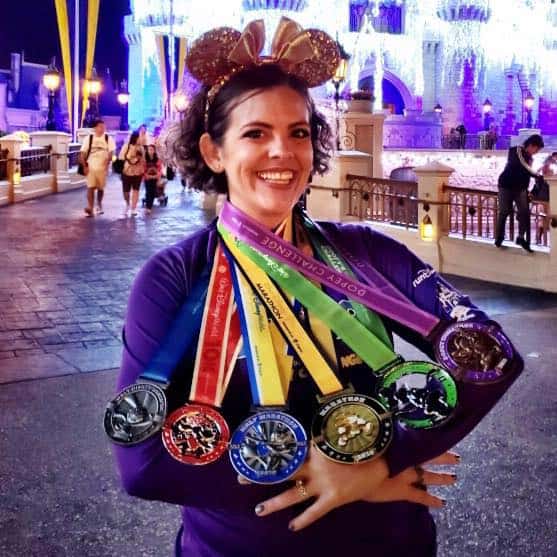 So far, they have only offered 5K and 10K races. This November they are also offering a 1K Kid’s “Raptor Run” and a Challenge which includes the 5K and the 10K.

Another big difference between runDisney and Universal Running was that in May when the popularity of the Minion Race was SO great they added another one. Meaning, they added the 2nd race to the weekend.

So there was a 5K on Saturday AND Sunday you could participate in. There wasn’t a challenge offered for doing both 5Ks, but nobody was stopping you from running it twice.

Another really interesting difference – The Minion 5K was a chip-timed event that had been certified by the USA Track & Field (USATF) national running organization.

runDisney 5K’s are considered “fun runs” and are not timed.

We have said it before and will say it again – all magic comes with a price!

Universal prices seem to be close to the runDisney pricing… about $10-$20 less per bib.  Obviously we don’t have pricing information for Orlando quite yet – but the current open prices for the Jurrasic World Race this November are:

Another main difference is that Universal is offering a “VIP Package” and a “Play All Day” Package to go along with race registrations, for an additional cost.

The Swag Difference Between runDisney and Running Universal

Over the years, the swag associated with runDisney races has gone down.  Back in the day, they had some decent bonuses you’d get with your race registration but now, not so much.  I do miss my little sample Clif bar.

Typically, you’ll get your race medals and a shirt for each race you participate in and they’ll usually have a list of small discounts you can get around Walt Disney World Resort- but that’s about it, folks!

So, in this instance, Universal wins. Just looking at the swag that comes in a Standard Package. I’m going to break it down for the Challenge race registration:

The VIP Package is an additional $130, and includes:

The “Play All Day” Package starts at an additional $40, and includes:

Answers to Your runDisney  FAQs