Sometimes we run (get it?) through an expo and decide to forgo a specific item. And then a few weeks or months later, it starts. You have runDisney regrets. If you missed out on items, here are a few places you should look for runDisney Merchandise Outside the Parks and well after race weekend has passed. Affiliate links are included in this post.

I am known in my running group for popping in and out of the expo and not sticking around too long.

I just can’t spend time wandering around when there are Disney Parks and attractions to explore!

But every now and then I have those runDisney Expo regrets and I wish I had picked something up. Here are a few ways to score runDisney merchandise outside of the parks and well after the race weekends.

Point to note: Items will not show up until 3-6 weeks after a race weekend!

Look For runDisney Merchandise At The Disney Outlets

There are a couple of Disney World merchandise outlets in the Orlando area.

They won’t have runDisney merchandise stocked right away, but within a few weeks or months after the race, you can find some of those items available at a deep discount.

This obviously won’t help you if you have already left the area and aren’t coming back any time soon, but if you are (or have a kick-a local friend willing to do you a solid!) then you might score a PR in savings on runDisney Merchandise. 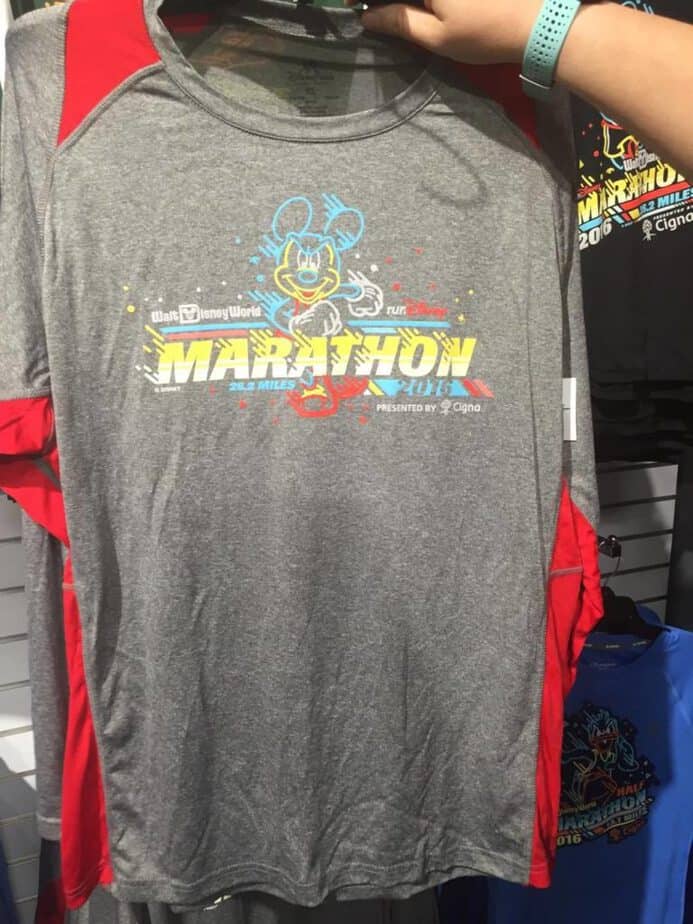 Where Are the Disney Outlets in Orlando?

The Character Outlet closest to Disney World is probably the best Disney Outlet in Orlando. I’ve had some luck finding post-race merchandise here.

Parking kinda sucks here, so you might need to decide how committed you are to possible savings when you go!

Character Warehouse on International Dr. is another option.

This one is near Universal Orlando (tell my boyfriend, Harry, I said hi!) and you might need to consider if it’s worth the hike to get there.

Know a Cast Member? You Might Be In Luck For Discount runDisney Merchandise

I preface this to say: do NOT ask any ol’ cast member you meet online to do this for you. If you happen to have a family member or very close friend who has access to these locations, then maybe it’s worth a discussion.

The cast member-specific store that might have runDisney merchandise after the races is called Cast Connections.

But cast members are not supposed to go in and buy for the general public, nor are they going to snap up things and sell on Ebay. That’s a big no-no!

However, if you have a friend who can help you out, the savings and that elusive runDisney item might be there.

I didn’t want to jinx anything by buying merchandise for my first (and only- yes, I swear to this!) marathon. But a friend was sweet enough to check out Cast Connections for me soon after the race and found me a shirt, a magnet, and a travel coffee mug to commemorate my experience.

Because there are plenty of those out there! They aren’t official runDisney merch, but they are still pretty dang cute inspired by designs.

You can find all kinds of shirts, coffee mugs, stickers, costumes and more if you head over and take a look at etsy.com

It’s weird, but I’ve seen it. And it’s totally random and hit and miss.

You can sometimes find runDisney merchandise on Amazon after the race has passed.

I don’t think these are official channels, but most likely folks who purchased in bulk and decide to sell later.

Recently I’ve seen the old school runDisney magic bands for sale as well as Princess Half Marathon jackets with the tags still on them.

And hey, here’s a runDisney Marathon “I Did It!” shirt for sale.

eBay (If You Must!) Will Have runDisney Merchandise

I don’t love encouraging Ebayers who snap up #allthemagnets and then mark them up and sell to desperate runners.

But… it’s an option.

My suggestion is to wait things out a bit and see what happens after a few months. Prices come down and you might be able to swoop in and score some items at a more reasonable price.

I bought this Avengers Half Marathon Dooney almost a year later on eBay (tags intact) for less than buying at the race. My hesitation at the run ended up paying off in a bit of saving because I was patient!

Facebook has a robust Marketplace option right on your home feed.

But the real scores will be the Facebook groups that have runDisney ties and a marketplace connected group.

The two biggest Facebook groups for runDisney enthusiasts are runDisney run and Team #runDisney. Both have a marketplace option where you can snap up some previous race items.

I’ve bought magnets there when I decided I just needed one of the Star Wars Inaugural race magnets three months after the fact.

Keep these options in mind if you decide to skip that runDisney Princess Half Marathon Dooney & Bourke this year and regret it later. Happy shopping, runDisney friends!

Answers to your runDisney FAQs

runDisney Costumes You Can DIY